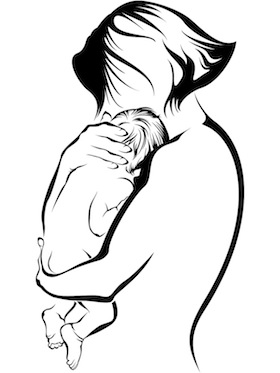 Thank you to those of you who have been checking in on the site lately.  I want to apologize for not having posted anything new in a couple of months.  I’ve had my hands full lately, as my husband and I just welcomed our first child into the world at the beginning of November.  We have a beautiful little girl!  As a speech therapist who has specialized in pediatrics for most of her career, I’ve always worked hard to understand the perspective of the parents I work with.  However, there’s nothing like being a parent yourself to really understand how one can worry terribly about your child and if everything is going to be okay.  These last couple months have taught me many lessons about how parents can look at the therapists and professionals working with them and tell if the working relationship is going well.  I’d like to share these thoughts with you and also get your input from your experience as a parent.

Lesson #1 – I learned that any plans you make about what kind of parent you’re going to be can easily get thrown out the window sooner than later.  And that’s okay.  Just because your child is not developing the way you expected does not mean that all is lost.  Preplanning is important, but winging it is sometimes what being a parent is all about.  We can’t plan for everything.

As a therapist, some of my best ideas have come from “winging it” and seeing what works for that child and family.  As a parent, I decided a long time ago that I wanted to try nursing instead of bottle-feeding when my child was born, but apparently I forgot to give her the memo because she would have none of it after she was born.  Multiple nurses and two lactation consultants in the hospital tried to get me going and, in short spurts things seemed okay, but I knew it wasn’t quite right.  They told me to go home and try for a few days to see if it got better.

Lesson #2 – As a parent, trust your gut.  I was frustrated at the lack of concern and the “wait and see” approach.  My instincts told me she wasn’t nursing successfully and that I needed to do something about it.  If you get that feeling after working tirelessly on your child’s therapy, speak up.

Lesson #3 – Sometimes it’s okay to “wait and see,” but it’s best to have your therapist give you something to work on while waiting.  After two days in the hospital and one more at home, our little girl wasn’t staying awake for feedings – eating was not a priority for her.  I called the lactation helpline and received an appointment the following day in their office.  She had lost over a pound since being born, and the consultant said she was very concerned about the amount of weight lost.  I started to worry.

Lesson #4 – A one-time observation (especially one where the child is not in their natural environment) should not lead a professional to say what’s “wrong” right away.  Your professional, whether a speech therapist or doctor or anyone else should know not to jump to a conclusion/diagnosis with limited information.  They should be…professional.

I went to the lactation consultant’s office.  She watched my baby eat (in a foreign place, with a pillow I’ve never used, and in a chair that doesn’t resemble anything I used to nurse my child at home) and said she thought she knew what was wrong – that my daughter had a posterior tongue tie (which is a very rare condition).    Be weary of anyone who gives a diagnosis too quickly.  Consider the circumstances and whether the conclusion seems appropriate.  Multiple observations are usually necessary.  Feeding is not my best area of expertise, but as an SLP, I knew enough to know what she was implying – that something was wrong structurally with my child’s anatomy that was affecting her ability to suck correctly.  I had never heard of this condition, and the lactation consultant said she didn’t know of anyone in Nevada who did the surgery to correct it.  Surgery!?!  That was a big assumption after watching her eat just once.

She said I could work on getting my little girl to suck from a bottle to get the nutrition she needed and to try and loosen her tongue a bit.   They sent me home with a breast pump, and instructions to try to nurse, but then bottle feed and pump afterwards.  There went my plan!  After a week or so of this routine, I was exhausted.  I knew parenting was going to be a lot of hard work and very little sleep, but every feeding time took 75-90 minutes!  Which leads me to…

Lesson #5 – There will be work involved to help your child improve, but it shouldn’t be exhausting.  Talk to your therapist if you are honestly trying to follow-though with home-based activities but it’s still not working.  The second appointment I had was scheduled with another lactation consultant who talked a lot about things not related to my child’s difficulty with nursing.  She heard I was an SLP and, instead of spending my appointment helping me with my child’s feeding problem, she asked me for advice on what to do regarding another one of her clients.  When she would finally give a recommendation, she’d say, “I have a trick that works all the time.”  All the time?!?  So, I had two different lactation consultants from the same organization, one telling me my daughter had an extremely rare anatomical condition that can only be cured with surgery, and the other telling me her “trick” that worked “all the time” would work for my child.  Not surprising, neither were correct.

Lesson #6 – There is no “one size fits all” when it comes to therapy.  Everything needs to be individualized to that child and family.  After two appointments with the second consultant, I was exhausted and ready to give up my attempts at nursing.  We tried several different bottles, and even bottle feeding wasn’t easy for her, but it was keeping her sustained.  I called a friend who is also an SLP.  She’s also a feeding specialist and a mom who had a hard time getting started with nursing her own children.  She watched my little girl nurse and use a bottle.  She pointed out that she was swallowing and therefore was getting something to eat, even if it wasn’t yet smooth sailing.

Of course, we also went to our pediatrician.  He said she was starting to have wet diapers – which is a good sign – and it was normal for some babies who are nursing to lose that much weight and to wait a bit longer for my milk to come in.  He also reminded me that all was not lost if I couldn’t nurse – tons of kids eat formula and turn out fine.  It gave me comfort to know my concerns weren’t completely unfounded but also that the situation wasn’t dire.

I called the lactation helpline in one last attempt to not give up my plan and ended up talking to a third lactation consultant, who was much better than the others.  She calmed me down and told me it was fine to take turns with nursing and trying the bottle so that I could get some rest.  Finally, I could cut down our feeding times to less than an hour.  When I came into the office again, I met with this third consultant.  She was the first consultant to spend some time talking about the progress that my daughter was making with eating.  Up until that point, I felt like I had not been given much hope.  My daughter was gaining some weight back, and she was staying awake longer than when we started.

Lesson #7 – Strength-based intervention keeps us fueled and motivated to keep working.  When she gave me recommendations, she talked about them being suggestions – that we have to try things and see what’s going to work for me and my child.  After another week of trying the strategies given by the third consultant, of getting a bit more sleep, and my child finally eating a bit better, both with the bottle and with nursing, we were all fueled enough to go back to our original plan.  From that point on, our little girl has been nursing exclusively and has been growing like a bean stalk.  It took time, a second/third/fourth opinion, and some trial and error, but we got to where we had a good team to work on meeting our goals.

Most of you have been parents much longer than I have and you likely have been through a situation like mine with professionals of one sort or another.  It’s important to talk openly about these issues, not suffer in silence, and not give up.